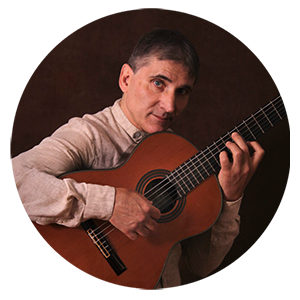 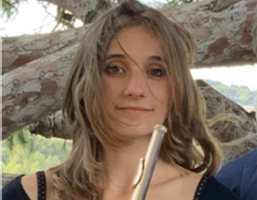 Arthur Dente is a French guitarist, composer and performer trained in classical and improvised music.

Of Portuguese origin, he develops in his compositions an interaction between the Iberian Peninsula, Europe and, by extension, the cultures of the world.

In addition to the dominant European Latin style, his compositions incorporate other influences, including Celtic, North American, South American, Indian, and Arab-Andalusian cultures.

The trajectory of life, adolescence, the path traveled, his relationship with his father, guide the musician along complex and extravagant artistic paths.

In 2019 he created with the Aix-Marseille Academy a work entitled “Alto Plano” that brings together a choir of 130 children, a professional octet and an orchestra of young musicians from the Conservatory of Aix en Provence. This exhibition, presented on May 2, 2019, highlights his recurring idea of ​​”Indigenous”, that primary being that constitutes us and that is diffused on earth through the development of cultures with specific aesthetic points of view. It is this desire to bring these different cultures closer to universality that animates his musical project.

Young French flute player Valentine Dente studied at the Conservatory of Aix-en-Provence and has been performing with various ensembles throughout Europe and the United States of America. She has been a regular member of the Magellan Ensemble since 2009. The Ensemble Magellan is comprised of 14 musicians, singers, and dancers, led by the guitarist and composer Arthur Dente. In 2012, she joined the “Junior Orchestra” in collaboration with the London Symphonic Orchestra at the “Grand Théâtre de Provence’ and also performed with Las Indias Quartet in the “Off Avignon Festival. She has also performed with the Lille Company of “Theaatre des Seas du Nord” directed by Brigitte Mounier. In 2016-17, she toured with her father guitarist/composer Arthur Dente as the Duo Alto Plano in the United States. She received Chamber and Flute music awards at the Conservatory of Aix-en-Provence in 2017.

This website uses cookies to improve your experience while you navigate through the website. Out of these cookies, the cookies that are categorized as necessary are stored on your browser as they are essential for the working of basic functionalities of the website. We also use third-party cookies that help us analyze and understand how you use this website. These cookies will be stored in your browser only with your consent. You also have the option to opt-out of these cookies. But opting out of some of these cookies may have an effect on your browsing experience.
Necessary Always Enabled
Necessary cookies are absolutely essential for the website to function properly. This category only includes cookies that ensures basic functionalities and security features of the website. These cookies do not store any personal information.
Non-necessary
Any cookies that may not be particularly necessary for the website to function and is used specifically to collect user personal data via analytics, ads, other embedded contents are termed as non-necessary cookies. It is mandatory to procure user consent prior to running these cookies on your website.
SAVE & ACCEPT